Belgian music-producer Lost Frequencies joined us at the BPM Supreme–Nexus Radio Lounge during Miami Music Week to talk about his latest single Recognise. His new track features Irish alternative-pop artist Flynn on vocals. He also talks about his upcoming U.S. tour, the inspiration behind his live shows, but more importantly! Who he’s been stalking on Instagram! 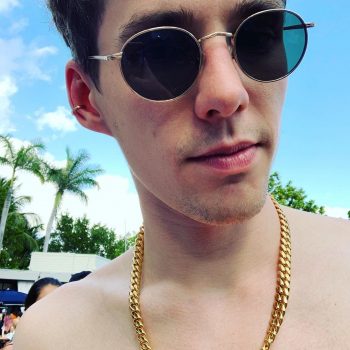 RONS: This is Ron for Nexus Radio. We are in the BPM Supreme Lounge with Lost Frequencies. How are you doing today?

RONS: We are happy that you’re here and I recognized you yesterday, someone was tearing apart your bag!?

Lost Frequencies: Yes, they were. It was a pretty fun interview actually which showed another side of the daily life we have (as DJs) …we had to open our bag and pull everything out. I put in a few extra beers as a joke. I’ve been on tour for the last three, four years, so I guess my bag has evolved into my special DJ bag.

RONS: Speaking about tours, aren’t you coming to the U.S. later this year?

Lost Frequencies: Yes, we are doing a live tour in October. I’m bringing a live show…one drummer, one guitarist, and I’m going to be on the keyboards, and we are going to try to bring as many singers as possible with us to perform the music live, but in a DJ set format. So, the music won’t stop …everything will blend into each other. I did it last year (for the first time) at Tomorrowland and it was a crazy experience! So, this time we’re going on tour with it!

RONS: Congratulations! Is there a specific reason that you’re going for a live show versus a DJ show?

Lost Frequencies: Not truly. It was more of a personal challenge …because in Belgium I’m a headlining a lot of festivals and after every show, I was always feeling a little bit empty, you know? people … expect something more. That’s when I began the whole live show experience and it was a completely different take on the show.

RONS: Producing live shows, is that changing how you are producing music as well?

Lost Frequencies: Yeah, for sure. The arrangement is completely different. I’m having a lot of fun rethinking all the music and rearranging everything again into something different.

RONS: Tell us about Recognise, your new single.

Lost Frequencies: My new single, like you just said, is called Recognise and it’s kind of a mix between my two last singles Like I Love You and Crazy. It has this power and drop like Crazy, yet it also has the organic sound of Like I Love You. Flynn is the singer and he has an amazing voice; He comes from Island Records and …I was pretty happy with the final result.

RONS: How did your parents react when you decided to become a DJ?

Lost Frequencies: It was kind of a long process because I’m more of a music-producer than a DJ. I was producing music for at least three to four years …before my music went big. Then I had to make a choice between going to my exam which was taking place the same week that I had to play Tomorrowland Brazil which was my first festival ever. I had to talk with all my teachers and I was like ‘I have this amazing opportunity that’s presenting itself and I don’t want to miss it, but I don’t want to skip school either.’ So, I spoke with the university and they were like ‘Don’t worry, take your chance and if it doesn’t work out …just come back and try again’…and my parents were very supportive.

To find out why Lost Frequencies requests scratch-off tickets in his artist rider, which Miami Beach store he buys in T-shirts in, his favorite ABBA song and more, listen to the full interview below.